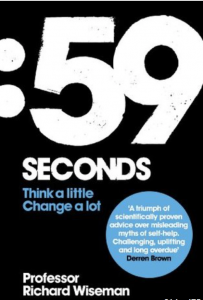 ’59 seconds’ by Richard Wiseman is a book that claims to offer ‘self improvement’ advice based on REAL findings from psychological studies. The book covers 10 life areas: happiness, persuasion, motivation, creativity, attraction, stress, relationships, decision-making, parenting and personality. It claims that much of the standard advice from self-improvement gurus has no basis or evidence to support it, or may even be incorrect. For example, one story you often see in self-improvement books and articles suggested that a study once showed that simply writing down a list of goals makes you dramatically more likely to succeed in life.

Yet no-one has ever been able to locate this study. Writing down goals may or may not be effective, but we shouldn’t be convinced that it is on the basis of a study that may never have existed! It’s surprising how pervasive this ‘study’ has become; surprising how – in our admirable quest to become more effective – we can be so gullible!

In a sense ’59 seconds’ helps to give us more genuine, realistic and proven techniques. However, it also falls prey to our over-eagerness for quick solutions. Indeed, the subtitle is ‘Think a little, change a lot’ and it promises to provide “a fresh approach to change that helps people achieve their aims and ambitions in minutes, not months”. This desire for ‘quick-fix’ solutions is understandable – many of us lead very busy lives – but can also leave us open to being uncritical. It’s like we’ve kicked credulity out of the front door, only to have in sneak back in through the back. For example, it can be a bit of a stretch to create general lifestyle advice out of the one-off findings of psychology experiments. Many such experiments are conducted with relatively small numbers of participants who are not typical of the general population (i.e. they are young University students). This means that what worked in an experiment might not always work for everyone else. Equally, the participants in an experiment don’t always know the aim of the experiment, and any results found might be dependent on being kept in the dark. When you are fully aware of the intended effect of a technique, it might not be so powerful. Also, things that work in the artificial environment of a University psychology lab might not always work out in the ‘real’ world, with all the complexity of real life. Some of the experiments are also based on quick, one-off results. Who is to say that the results will hold up if you keep repeating the technique over and over? Or that the results will hold up over the long term? However, to be fair, not all the conclusions in the book are made on the basis of one study or small numbers of students, some flow from a whole body of work, or from longer-term studies tracking hundreds of people.

It’s surprising how often papers published in academic journals have flaws in them. There is tremendous pressure on academics these days to publish as much as possible, and sometimes papers make it out the door that have fatal weaknesses. Just because something has been published doesn’t mean it proves what it claims to, and just because someone has the word ‘Professor’ in front of their name doesn’t mean that they are infallible.

Nevertheless, despite this criticism, I think there’s a lot of valuable material in the book. One of the conclusions you can draw from it is that we’re more influenced by our immediate environments than we realise. For example, one finding discussed in the book is that being around plants makes us more creative. Also, despite my warning of over-generalising from single academic studies, I think it’s possible that surprisingly small shifts in behaviour can have apparently disproportionately large effects (a little like the 80/20 law which operates in many areas of life, showing that a majority of results are created by only a minority of causes). For example, it can be far more effective to praise children for their effort, rather than their ability. Giving them the idea that they are naturally very able at something may seem like a good thing, but it can make them lazy as they feel that they shouldn’t need to work hard at something that they have a natural talent for. It can also make them fear failure, as this would seem to disprove their talent. These two consequences can mean that the child then tries less hard. In contrast, praising them for their efforts can encourage them to work hard, and overcome setbacks and failures.

In conclusion, I think that many of the techniques in this book may be limited in their application, due to the artificial nature of psychology experiments, yet Richard Wiseman has done a good job in summarising a whole mass of findings that are potentially both practical and not widely known. Often these kinds of books can be valuable even if you only get one idea out of them thats going to be useful to you. In ’59 Seconds’ you are almost certainly going to find a bunch of useful ideas, at the very least, and I wouldn’t hesitate in recommending it.

Here is a summary of some of the advice he gives on increasing your happiness, based on scientific research:

(2) Smiling, sitting upright and generally ACTING happy, can make you feel happier. The smile can’t be fleeting, it must be for between at least 15 to 30 seconds or more.

(4) Similar to (3), even if you don’t have significant problems, keeping a diary in which you express gratitude towards all the good things in your life, positive thoughts about the future (e.g. imagine – realistically – things have gone as well as you can hope, and you have achieved your goals), and affection towards those you love/have loved. Part of the reason for why this works is that the human brain has a tendency to quickly ‘habituate’ to almost anything and thus we take things for granted and must remind ourselves of them.

And heres some of the advice he gives on motivation:

(1) Simply visualising your goals may make you feel good but it’s not always effective. For example, in one study, students who visualised doing well in an exam actually then spent less time revising and preparing for it! Don’t let visualisation take the place of actually working towards an outcome. It could also be that by imagining ideal outcomes you are setting yourself up to be ill-prepared for dealing with the inevitable challenges that meet us on the path to any destination.

(2) Here are the motivational techniques which other books advocate, or which might sound like common sense, but DON’T tend to work: focusing on someone you admire who has done what you want to do (i.e. a role model), thinking about the bad things that will happen if you don’t achieve what you want to, trying to suppress tempting or unhelpful thoughts (e.g. trying to not think about cigarettes if you are trying to quit smoking), relying on willpower, and fantasising about how great your life will be when you achieve your goal.

(3) Here are the motivational techniques that do tend to work: making a step-by-step plan, telling other people about your goal, thinking about the good things that will happen if you achieve the goal (subtly different from fantasising about ‘how great life will be’ if you achieve it), giving yourself rewards for progressing towards the goal, recording your progress.

(4) Avoid procrastination by chopping a task down into sub-tasks, and then telling yourself you will just work on it for only a few minutes. This helps avoid the anxiety we feel at the prospect of starting a task which could take a lot of work to complete.