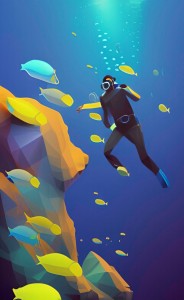 For the past year I have been practicing Transcendental Meditation (TM) twice a day. Its main effect on me has been to make me feel generally calmer. Each session lasts 22 mins. The meditation itself is 20 minutes and then there is a two-minute ‘coming out’ period where the meditation has ended but I haven’t yet opened my eyes.

I learned how to do transcendental meditation on a standard course over several days. The process itself is very simple. One interesting aspect of it is that you can be good and effective at it very quickly. In fact, my experience of it over the year is that you don’t improve, despite practicing it so frequently. Rather, the theory is that the more you enter the transcendental state the more calm clear-thinking begins to permeate your normal waking state.

Despite the process being simple, it’s not always easy. In my experience, it’s almost impossible for me to switch off the voice in my head. The aim of transcendental meditation is to experience moments of pure consciousness with no thoughts. A good metaphor is scuba diving, where during one dive you gradually descend and may touch the bottom of the ocean floor once or more. Touching that ocean floor are the brief moments of no thought. The advice is to not become stressed by thoughts intruding. Just notice them, stay relaxed and bring yourself gently back to your mantra.

So, despite not always being successful in touching the ocean floor on each dive, I feel like there is still value in the process for me. Even if thoughts have intruded all the way through the 20 minutes I still feel somewhat calmer and clearer afterward. However, when I do have a good session and manage to reach those moments of pure consciousness they feel very pleasant. The nearest I can describe the feeling to is imagine the mild bliss of relaxing on a sunny day and eating chocolate. It’s a sort of dreamy, relaxed clear pleasant feeling. And after having done a really good session I can feel very restored and clear-minded. Just twenty minutes can sometimes feel like waking from a good night’s sleep.

Interestingly, the theory in transcendental meditation is that there is a cyclical relationship between the relaxation of no thoughts and the arising of new thoughts. When you are very relaxed in the meditative state your body is more relaxed than in deep sleep and has the opportunity to repair and adjust itself. During the process, there will be moments of nerve signals or movements coming from the body (eg think of your stomach gurgling or a muscle twitching) that will then set of thoughts in your mind. Therefore intrusive thoughts are natural and somewhat unavoidable.

One key part of my managing to meditate daily throughout the year has been the TM app on my iPhone. This works

on the principle of ‘don’t break the chain’. The app has a calendar and a timer. When I am ready to do a meditation session I set the timer going and close my eyes. I then allow the mantra to repeat in my mind. Meanwhile, the counter is counting down from 20 minutes. After a while, I briefly open my eyes to glance at the screen to see how many minutes are left (there is no alarm on the counter; I assume to avoid even the slightest amount of anticipation or anxiety). Then when it reaches zero, there is a further two-minute ‘coming out’ timer. Finally, it presents you with an inspiring quote about transcendental meditation. Once you have completed a session, that date on the calendar is marked with a light circle, when you have completed two sessions it changes to a darker circle. This encourages you to meditate daily as you build up a ‘chain’ of days on the calendar, marked with circles, and you feel kind of bad if you miss a day. While I have had many days where I only managed to meditate once, I managed a whole year with having only one day in which I didn’t meditate at all.

I’m glad I started doing this form of meditation. It has genuinely made me feel calmer in my life. Will I continue it twice a day? I’m currently unsure. I would like to, but I feel that the pressure I put on myself to do so is perhaps counterproductive to being calmer. Ironically, being more relaxed about when and how often I do it might be more beneficial.

Some background info: What is Transcendental Meditation?

The global Transcendental Meditation organisation includes educational programmes, health products and other related services. However, it had a humble beginning in 1955 when Maharishi began publically teaching a traditional mediation technique he has learned from his master, Brahmananda Saraswati. The movement gained momentum as the Maharishi undertook several world tours through the mid-fifties and sixties during which he initiated thousands. He developed the teacher training programme in order to accelerate the rate at which the technique could be brought to people and created a specialist organisation through which lessons could be presented. As the technique became more popular in the sixties and seventies, it was endorsed by celebrities and supported through scientific research and was also incorporated into a number of schools, universities and corporations across India, Europe, Latin America and the U.S.

Originally Maharishi teachings were expressed in terms of religion and spiritualism, however this focus shifted to a more scientific presentation later on, coinciding with its rising popularity. Regardless, and even with the addition of advanced meditative techniques and organisational changes, the simple technique has remained relatively unchanged.

The method can be used to bring benefits to the mind and body as a tool for relaxation, stress reduction and self-development.  The technique is designed with the intention to detach the self from anxiety in order to promote harmony and self-realisation by meditation and repetition of a mantra resulting in a state of deep rest. It also aims to develop the total brain, that is to say, to increase creativity and intelligence and to improving decision-making and problem-solving abilities. In addition, it has also been reported to bring about numerous physiological changes which improve respiratory volume and heart rate, help to regulate corsitol and other hormones associated with stress, and regulate serotonin, one of the neurotransmitters associated with mood. 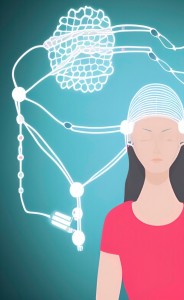 As one of the most widely practiced meditative techniques, it also one of the most widely researched, with no less than 340 peer-reviewed studies having been published on the topic. Early studies examined the physiological parameters of the meditation technique. Whereas subsequent research has focused on its clinical application, cognitive effects, impact on mental well-being, as well as its benefits for cardiovascular disease. Research funded by the National Institutes of Health shows that the Transcendental Meditation technique is an effective mind-body practice for reducing stress and stress-related disorders, including hypertension, high cholesterol, stroke and atherosclerosis. While a study published by the journal Psychosomatic Medicine found a reduction in the rate of admission to hospitals for those practicing Transcendental Meditation in nearly all disease categories, including for physical and mental illness and substance abuse. In addition EEG measures also demonstrate an increased orderliness and integration of brain functioning. Moreover, all of these benefits are reported to increase over time.

At its most simple it involves the use of a sound or mantra for 15-20 minutes twice a day whilst sitting with eyes closed. The techniques are, however, taught in full by means of a standardised course by certified teachers.  Importantly, the Transcendental Meditation technique is taught through a non-profit educational organisation. The goal of which is “to develop the full potential of the individual, minimise the negative impact of stress, and bring unrestricted and fulfilling progress to all areas of society”.

What does the literature say?

Maharishi’s teaching asserts that there are seven levels of consciousness: waking; dreaming; deep sleep; transcendental consciousness; cosmic consciousness; God consciousness; and, unity consciousness.  In the 1963 book, The Science of Being and Art of Living, he asserted that with practice, and over time, the conscious mind is enabled familiarity with the deeper levels of the mind, such that the subconscious mind is brought into the capacity of the conscious mind, resulting in an expanded awareness in daily activity.  His lessons also teach that those who practice the technique can experience the ‘source of thought’, that is to say, they can transcend all mental activity reaching a ‘pure awareness’ or ‘the ultimate reality of life’. In this way Maharishi states that it is possible to experience transcendental consciousness through Transcendental Meditation, and, with diligent meditation, potentially enabling an awareness of cosmic consciousness as indicated by an “ever present wakefulness” even during sleep.

The Transcendental Meditation movement has also been described as a cult, a “sect” and a “plastic export Hinduism” in literature and in the mainstream press. Sceptics have also undermined the credibility of the Science of Creative Intelligence, its associated theory, calling it pseudoscience. While it has been commended for its high media visibility and effective global proliferation, it has also criticised for the use of celebrities and scientific endorsement for marketing purposes.

Transcendental Meditation has been described as both a new religious movement rooted in Hinduism, as well as a non-religious practice of self-development. Supporters emphasise that with Transcendental Meditation there is no philosophy or dogma, just a meditation technique. They argue that It should therefore be conceptualised not as a religion, but as a belief system which aims to have a positive effects on the mind, the body and relationships. They draw attention to the way in which participation in programmes does not require specific spiritual belief. Indeed, today it practiced by people of a diversity of religions, in addition to those who identify as atheists and agnostics.