2 min readCould the next Nintendo console have biometric sensors? 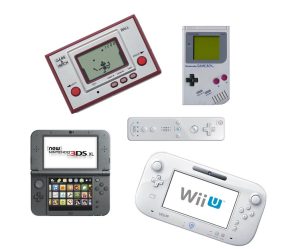 Video games are big business, and Nintendo are one of the industry’s leading brands, yet they like to do things differently. Nintendo tend to make their games consoles a little more innovative than the competition. Whereas their competition adopts the fastest and most impressive microchip tech, Nintendo often use a strategy they call “Lateral Thinking with Withered Technology.”. This means they focus more on leveraging older cheaper technology to create fun experiences you can’t get from other game devices. Examples include their original innovation of games made from cheap LCD tech (‘Game and watch’), then their inclusion of a motorised robot and a light gun with their first home console (The ‘Nintendo Entertainment System’), a cheap monochrome portable game system at a time when competitors were going full-colour (‘Gameboy’), a motion-controlled game system (‘Wii’) and so on.

Industry analysts have predicted that Nintendo will release a new console in 2024. Are they preparing something that again uses tech in an innovative and perhaps unexpected way?

A recent quote from the legendary game designer at Nintendo, Shigeru Miyamoto, suggests so: “…Nintendo’s strength is in creating new video game experiences, so when we release new hardware in the future, we would like to showcase unique video games that could not be created with pre-existing hardware.”

One clue could be an initiative that they began around a decade ago that they referred to as ‘Quality of life’. This was an effort by Nintendo to develop ideas for products and services to help people live healthier and more enjoyable lives. The products were based on the company’s expertise in gaming and entertainment, and focused on individual health and well-being, as well as family and social aspects. Though the project never saw fruition, the concepts and ideas behind it are still being considered today by Nintendo.

Originally this initiative was considered a separate business area from their video game business. But perhaps some of the concepts they’ve developed behind the scenes could make their way into their next game system.

For example, biometric sensors – using cameras, microphones, or sensors that touch the body, such as those measuring heart activity or electrical skin conductance – could be built into a game device to capture information about the player’s anticipation or excitement level and adjust the game accordingly. With biometric sensors tracking the player’s physical responses, the game can adjust the action and difficulty to match their level of engagement. This provides a more personalised and immersive gaming experience. When it comes to the ability to adjust difficulty levels this could be used to guide less experienced gamers gently through the learning curve of a game, thus potentially widening the appeal of games to a wider market.

Equally, information about our physiological states could be used to help improve our health and wellbeing, such as tracking our sleep or fitness levels. Weaving this information into video games could help motivate people to improve in these areas and, again, could widen the appeal of video games consoles.

Whether or not Nintendo do indeed use such sensors in their next device, I look forward to discovering what innovation they’ve been working on.