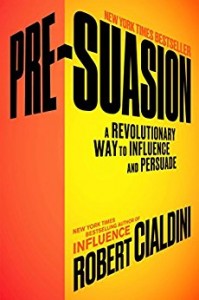 In 2004 Rolling Stone magazine celebrated 50 years of rock n roll with a list of the top 500 songs from the era. Their top two were ‘Like a rolling stone’ by Bob Dylan, and ‘I can’t get no satisfaction’ by the rolling stones. A corporate publishing version of the fact that we tend to like people more when we’ve previously discovered that they share something personal with us, like the same name or birthday.

These are examples of what author Robert Cialdini calls ‘Pre-suasion’ in his book of the same name. Pre-suasion is the strange phenomenon of people being irrationally influenced by things they’ve just been exposed to. Whatever we’ve just been paying attention to assumes increased importance in our minds.

Some of these effects aren’t necessarily that surprising. For example, if you’d just been reading about road safety statistics you might be more biased towards buying a sensible car. Whereas if you were single, and you’d just watched a romantic comedy movie you might by more biased towards buying a cool looking car that would make you stand out to the opposite sex more.

In fact, these two drives – safety vs standing out from the crowd – are mentioned a lot by Cialdini. The triggering of one or the other leads people down different decision pathways.

They are probably important as they were relevant to our caveman ancestors – and hence they shaped the way our thinking developed. For example, whether you should play it safe, or try to position yourself in the centre of the crowd, could have made the difference between being killed by a predator or being socially ostracised (something that could have been a serious problem if you were living back in the days of small, close-knit groups of hunter-gatherers). But the opposite drive is also powerful in different situations: when searching for a mate to have children with – the other big evolutionary success marker! – seeming different and standing out from the crowd assumes more importance.

These kinds of influences fit in with standard social psychology thinking. However there are some weirder pre-suasion effects.

For example, just being exposed to a number will subsequently influence how much you are willing to pay for something. Ciadini quotes research showing that if a restaurant is called ‘Studio 97’ diners are willing to pay more for meals than if it’s called ‘Studio 17’. It makes no rational sense when you think about it, yet it’s strange – scary even – to imagine that such effects could be biasing our thinking all the time.

Another weird pre-suasion effect is when medical conditions are mentioned in the media – such as the possible sightings of snakes that have poisonous bites – many people report the symptoms even though they haven’t actually suffered from the problem. This isn’t just hypochondria, people can actually experience bodily symptoms. He mentions a schoolteacher who (falsely) thought she smelt a gas leak in her school. Over a hundred students and staff were hospitalised with symptoms like dizziness and nausea.

Pre-suasion effects are particularly relevant to copywriters and salespeople. Or, indeed anyone who communicates publically. Our specific choice of words can influence how people react, above and beyond what we thought we were saying. Cialdini mentions how airline pilots have now been trained to avoid words that can trigger associations with risk and death, like ‘terminal’ or ‘your final destination’, and instead replace them with more neutral equivalents like ‘gate’ and simply ‘your destination’. Used car salespeople have long used this principle, and hence talk about ‘pre-owned’ rather than ‘used’ vehicles. The former triggering associations of possession, the later of ‘wear and tear’.

The main theme of pre-suasion for me is that our minds basically can’t distinguish between other important something is from how much attention we’ve given it. We assume that we pay more attention to things that we consider important, but the truth may be that we just think things are important because we’ve paid attention to them.