A summary of ‘The Relativistic Brain: How it works and why it cannot be simulated by a Turing Machine’, by Ronald Cicurel and Miguel A.L. Nicolelis

“I strongly suspect our brains are analogue rather than digital. I think it would be rather surprising if it turned out to be digital, since we know that analogue is more powerful and nature usually prefers what is more powerful.”   Freeman Dyson 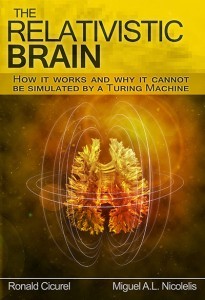 ‘The relativistic brain’ is a short but dense book that introduces a new theory of how our brains work, and why they will never be simulated on a digital computer.

We’ve become so accustomed to the idea that our brains are replaceable by digital computers – that most of us assume only a matter of time before it happens. That we’re just waiting for computers to get fast and powerful enough. However, few people have thought seriously about why it might not ever happen.

Neuroscientist Ronald Cicurel and mathematician Miguel A.L. Nicolelis believe that simulating the brain in a computer isn’t possible. By this they don’t just mean that its hard, or that it will take many years to develop a powerful enough computer to achieve it. They mean that its always going to be impossible. This sounds almost incredible to most of us, having become accustomed to the idea that A.I. is inevitable.

There are few – if any – popular science fiction scenarios in which artificial intelligence is impossible in our future. There are many in which A.I. presents an existential threat to Humans (such as in the Terminator movies) and in the Dune novels, artificial intelligence is seen as such a threat that it is banned, and Humans develop their own minds to extraordinary levels. Although, to be specific, Cicurel and Nicolelis aren’t necessarily saying that computers can never be ‘intelligent’, after all they can already do many things that previously only intelligent creatures could. Their argument is more around whether a computer could be intelligent in the same way that we are.

Their argument is based on three main ideas, two of which are inspired by recent evidence of how the brain works, and the third is more based on ideas that have been around for decades.

Over the last 25 years neuroscientists have been able to record the brain at work using a technique called Chronic, multi-site, multi-electrode recordings (CMMR). Essentially these are hair-thin sensors that can monitor the firing of thousands of working neurons in the brain.

One offshoot of this research was the ‘walk again’ project, that made brain-computer interfaces to help paralysed people control an exoskeleton to enable them to walk. It relied on the finding that our brains are ‘plastic’, they can re-wire themselves to cope with new sensory inputs (in this case from a robotic exoskeleton).

The work led to some insights about how the brain works. For example, that almost any task the brain does involves activity distributed across many areas. The same task can be achieved by different groups of neurons in the brain each time its performed. It’s not like there are always definite areas of the brain that are specifically always responsible for doing a particular thing.

Even the areas that are usually involved in a particular thing – such as the Somatosensory cortex, the area involved in processing touch from around the body – can be co-opted to process infra-red light. Scientists have attached the output from an infra-red light sensor into the somatosensory cortex of rats, and they are then able to learn to perceive this otherwise invisible-to-them form of light (the scientists speculate that the rats perceive the light as a touch sensation!).

So the brain is versatile, and ‘plastic’. Different areas can be used to do the same thing, and any one particular task is done by multiple areas.

The old model of the brain was more focused on mapping out the different regions of the brain, assuming that it was organised spatially. However, Cicurel and Nicolelis propose a different model that they call the relativistic brain. In their model the brain isn’t limited by where activity can occur, but rather on the maximum energy it can use, and the amount of neuron firing that can occur, and the brain’s own history. Activity is then organised, and shifted around the brain according to those constraints.

This shift in perspective is analogous to Einstein’s theory of relativity, that works on the basis that the speed of light is fixed, but space and time are ‘plastic’ or variable. Quite a radical new way of looking at things.

The next part of Cicurel and Nicolelis’ theory of how the brain works is that it’s using both analogue and ‘digital’ types of processing. The firing of the neurons is basically the equivalent of digital processing, but there are also electromagnetic fields created by this firing (called NEMFs, or Neuronal Electromagnetic Fields). These fields add an important new perspective on the brain as they can do powerful types of computation that is different from what the ‘digital’ computation of the neurons firing on their own can achieve.

They argue that there is a circular relationship between the brain’s digital and analogue processes: the digital processes create the analogue fields, which in turn then shape the connections between the ‘digital’ neurons.

Essentially, the analogue NEMFs synthesise information from across the brain and thus create a model of the world around us that we use to generate expectations of ‘what’s coming next’. They call this model, created by our experience, and then shaping how we react and process things, the ‘brain’s own point of view’. They present some evidence that these NEMFs are really at work in our brains, influencing our perceptions.

They suggest that the analogue NEMFs could be responsible for a lot of our higher-level brain processes, like dreaming, our sense of self, consciousness, perception and generating mental imagery. This is a whole new paradigm from the type of computing that digital computers do.

The last part of their argument relies on ideas that have been around for decades, that relate to the fundamental limitations of computers. There are well-known mathematical reasons why digital computers are limited in the types of information they can process.

The mathematician Alan Turing created the concept of a ‘Turing machine’, essentially a digital computer that could run any kind of algorithm (or software) that you could formally define. Turing machines – or computers – are based on the idea of ‘formal systems’: a set of rules (similar to a mathematical equation or model) that can be known and defined precisely. So, for example, if you wish to model or simulate something on a digital computer you just need to know all the rules of the formal system of what you wish to simulate.

The mathematician Gödel showed that there are types of information that we seem to be able to process or access that can’t be captured by any formal system (and hence, computed). He was talking about mathematics, but the authors speculatively give the following examples of types of information that the brain deals in that can’t be simulated by a digital computer: creativity, intelligence, intuition, mathematical abstraction, artistic expression, empathy and altruism.

In contrast, our brains don’t work like a formal system. Rather they’re what scientists call a ‘dynamic complex system’. A bit like the weather, it involves many interacting variables. The mathematician Poincaré showed in the early 20th Century that even when you have systems with several interacting variables, over time you just can’t predict their behaviour. The types of behaviour – or processing – that comes from such systems is called an ‘emergent property’. So the processing of the brain is an unpredictable emergent property, rather than a formal, calculable system like the software on a digital computer.

There are more reasons why modelling the brain could be impossible. In order to model something in a formal system, you need to know what all the important elements of that system are, and then measure them. The less precise you are in capturing them, the less accurate your model will be.

Yet the brain is so complex, with so many interactions occurring at different levels, that it’s not only hard to capture everything that’s going on at each level, but how do you even know how much detail and how many levels you need to capture? For example, there is activity in our brains at the levels of atoms, molecules, electrical activity, chemical activity, activity of organised arrays of neurons, incoming sensory information, interactions with our bodies, our environments and other people. How do you know exactly how many of these things you need to capture in order to properly understand and model the workings of our brains?

Moreover, analogue computers – like the NEMFs in the brain – compute physically, in other words the fields themselves compute in a way that is unlike software running on a Turing machine. They can’t be fully captured in a formal system. All software can do is approximate their activity.

Even if you can model the processes in the brain approximately, running the simulations would take an impractically long time. For example, the physical, biochemical processes that the brain depends on, like the folding of proteins, would take an incredibly long time to simulate digitally. With millions of these types of processes going on, the length of time required to simulate them would be so long that the simulated brain wouldn’t be able to react to incoming information from the world around it in real-time.

The very structure of the brain is not designed, but rather it evolved over the course of millions of years. There was no master-plan, but rather an almost infinite series of interactions between our ancestors, their environment and eachother that determined which genes for coding the brain would be passed on to the next generation. Our brains are the products of a unique evolutionary history that can never be replayed, modelled, or fully known. Computers are designed and can be reverse engineered. It may be impossible to reverse-engineer the brain as it was never engineered to a plan in the first place!

Alan Turing himself realised that a Turing machine would never be able to compute everything and would need to be supplemented by a hypothetical device he called an ‘Oracle machine’. Importantly, this Oracle machine wouldn’t be operating as a formal system/digital computer. It would be something else, but exactly what, Turing couldn’t say.

The relativistic brain hypothesis is fascinating, and surprising compared to our usual assumptions about computers. There are many who work in the computer science field who assume that computers with Human-like intelligence will be created soon. Our ideas about the near future are often based on this assumption. What if it never happens? We may have computers that can do intelligent things, but their intelligence would never be like our own.